A basic shape, a complex story, a few cubic meters to tell, analyze, imagine and speculate over spaces and places, which a crowd of always different people has lived. Part of Francesco Arena’s work exactly deals with the dichotomy between formal rendering in the style of minimalism and choice of historical themes, which tell about key mostly harsh and upsetting moments of the history of Western civilization.

Arena is an Italian artist who was born in 1978. He considers news report as the reference point for his personal critical reflection and thinks of it as an unchangeable element since it is both part of the past but still open to transformation by memory transmission; according to the artist, news stories lose their tangible characters and become pure concepts, which collective memory elaborates. 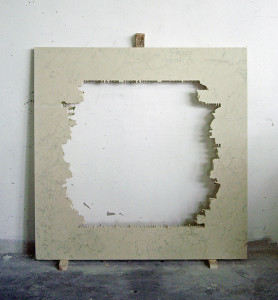 For example, this happens with the work Untitled (Bologna), 2001. It stands as a square marble sheet, which is pierced in the middle as if a grenade would have torn it. Actually, the deep cut is due to the 85 names of the victims of the massacre at Bologna train station in August 1980: they are carved repeatedly until they create a central hole that passes through it. It seems that the presence of the sheet as the symbol of collective memory and the continual celebration are not enough to stop the complete abstraction and cancellation of those names. Arena’s work is both charming and moving at the same time: he matches a formal with a perceptual antithesis. While plunging into the historical event, he appropriates it and gives us back a barer though more significant version. 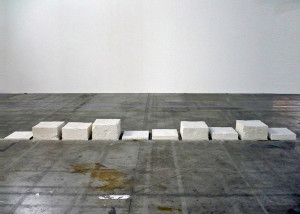 In Genova 2011 (group picture), Arena goes one step further and summons up collective and political conscience to reflect on what has happened. He does so by producing one of his most engaging works. Starting from the official group picture of the ten leaders who were at the Genoa G8 in 2001, he produced ten square molds (40×40 cm) of different height (from 0,5 cm to 22 cm) in a way which, if Carlo Giuliani would have been alive, he might have come up them to look in the leaders’ eyes searching for culpability or maybe only answers. 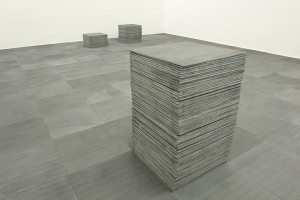 For 18.900 meters on slate (Pinelli’s way) of 2009, Arena physically became integral part of his creative project. He himself travelled through again anarchist Pinelli’s last way as a free man from the train station to home and then at the bar, anarchist circles and up to the central police station. He walked through an 18.900 meters long way as everyone of us carelessly does every day. The installation is made up of 332 slate sheets of 60x60x1 cm on which Pinelli’s 18.900 meters long way is carved. 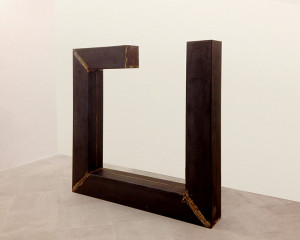 The confrontation with these affairs goes through the artist’s very spirit, both from a conceptual and physical point of view, becoming the measurement unit of his own reflection and, hence, of the project itself, as it is for the more recent work Tube of 2013. It is a square box-shaped metal tube, which has been cut and recomposed to become a square. The amount of metal employed corresponds to the artist’s body mass in cubic centimeters when the interior of the tube would be filled up with earth.

Therefore, the news report is no more employed as a medium to reflect upon the flowing of events and the memory depository; instead, it is the Self, our own presence on earth in a specific given moment. The artist becomes himself the question, starting and ending point of the investigation, his own weight and height become the limits and parameters of his works. 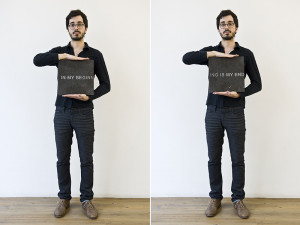 This centrality and personal calling into question seems to be clarified and expressed in works as Untitled (Eliot), 2013 and Untitled (Agostino), 2012. The first work is made up of two marble plates marquinia on which the artist carved the initial line of the quartet East Coker “In my beginning is my end” which Eliot himself chose for his own epitaph. In the second work, Saint Augustine’s words “I Have Become a Question to Myself” are stamped on two square slate and white Carrara marble molds. 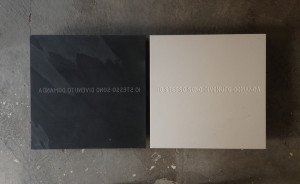 In this second work the answer itself becomes another question, actually a flood of questions as much as the beholder’s gazes. Arena leaves the beholders questioning themselves about Saint Augustine’s words while returning the work to collectivity and following an almost inverse path to the one he did in the previously mentioned works. 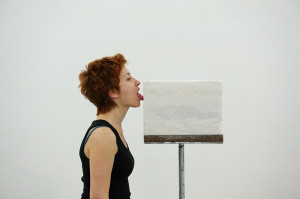 It is exactly in front of a sometimes distracted collectivity that Arena presented Riduzione di mare (2013) in the spaces of Monitor gallery in Rome. The work included an installation and a performance, which told about the tragedy of emigration. Performers progressively licked a 34 kg block of salt during the days of the exhibition with the aim of overwriting on the block a text translated in Morse code. The document filled up by the Dutch organization United for Intercultural Action (European Network Against Nationalism, Racism, Fascism and in Support of Migrants and Refugees) included the list of the names of those 16136 people who died in the attempt of emigrating to Europe, which mass media told us about from January 1993 to January 2012. At the end of the exhibition, the block seemed eroded and changed by human movement and humors as a fragment of past and at the same time still fluxing in time. 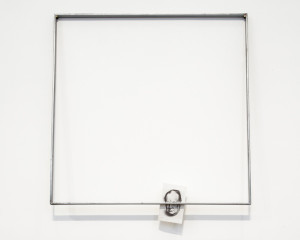 This interesting group of works completely clarifies the coordinates of the artist’s action in creating and producing his works. Arena identifies certain news reports or apparently completely private and personal events with the reading keys to break up the ordinary worldview, which mass media and collective gaze sometimes refer to, establishing a dialogue with American minimalism and carefully rooting all of his projects in a planning scheme working as the conceptual skeleton of every installation and performance.

The square shape, which is present in this selection of works, is the artist’s favorite; indeed, even though it is one of the most elementary polygons, various artists have often chosen the square as the ideal expression of the spatial dimension of their own works. Let’s think about Josef Albers or Donald Judd who have been celebrating square for many years. 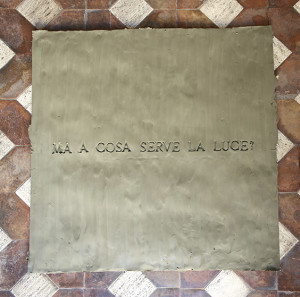 Arena’s works, as those by Albers, indeed, show an extreme reduction of forms in a lapidary and geometric style which is rendered through technical perfection. More than other 20th century artists, Albers gave shape to philosopher Ludwig Wittgenstein’s words, which stated that everything we see can be different and everything we depict can be different in the same way, showing that sometimes the most basic things are the most incompressible ones. As in Albers’ works, Arena’s installations as well might set some traps in which the spectator risks to be repeatedly caught because of the insecurity the work itself instills.

At the same time, Arena’s research formally materializes in tridimensional works, which place the experience of the space at the core in a similar way to Judd’s works. The apparently autonomous installations can’t be perceived without considering the relationship with the space they take up and influence. Formal rendering, instead, although materializes in a geometrical and abstract art, conceptually distances from the cold elegance of Judd’s research, which seemed to be banning any form of subjectivity.