on Dec 7, 13 • by Emanuela Pigliacelli • with Comments Off on Art & Adv – Annie Leibovitz for Vogue

Nowadays, it is well-known that advertising fashion photography often draws on that inexhaustible thesaurus coming from world art. Indeed, it is strikingly possible to find many instances of appropriation, manipulation and re-contextualization of artworks which sometimes hide behind subtle references, which can be perceived only by a careful audience, and sometimes are more evident with the whole image working as a straightforward pastiche of a famous painting. Hence, the tradition of the “Tableaux vivants” – actual scenic representations made up of one or more characters playing the attitudes, poses, situations and sometimes settings of famous masterpieces, which are mostly paintings – from late 19th century pictorial photography, passing to Luigi Ontani e Bill Viola, gets nowadays among the pages of a magazine, which is considered “the Bible of fashion”. 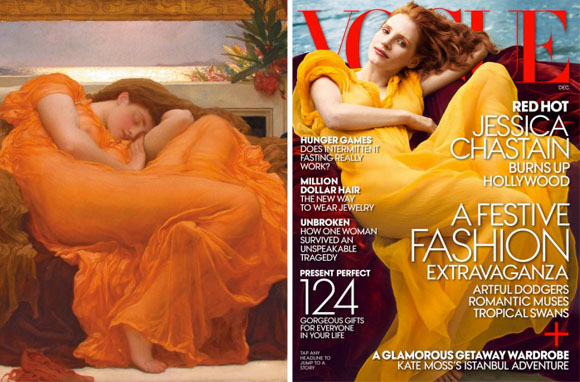 It is about this December American edition of Vogue, where photographer Annie Leibovitz and stylist Grace Coddington produced a particular service where model and actress Jessica Chastain is playing the role of the protagonists of eight works of art.
The ability of the photographer in reconstructing the compositions, studying lines, colors and lights is summed up with the stylist’s sensitivity, which was able to find the most apt high fashion attire, with the result of a series of shots worthy of competing with the charm of the original works. The selection of the paintings, splendidly reinterpreted by Vogue, is exceptional and alternates more famous works with pieces less known to the public.

The actress, who is Oscar candidate, appears in all her splendor and, wearing high fashion clothing, is able to perfectly identify with the atmospheres of these wonderful art pieces: her diaphanous skin and fire red hair enhance her delicate look which seems to be recalling that of a Pre-Raphaelite muse. Indeed, the cover starts off exactly with a painting which is considered by many as the emblem of such art movement for its form, colors and iconography: it is Flaming June (1894-95) by Frederic Leighton, one of late Victorian Age masterpieces. The slight make-up and lips with a vague smile bring back all the ethereal naturalness of the original muse who lays down on a red drape, wearing a perfectly modern and suggestive calendula yellow dress by stylist Olivier Theyskens. 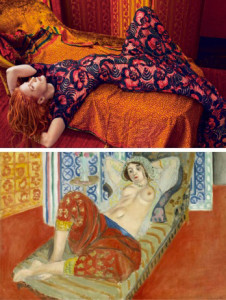 In the article opening page, warm colors prevail once again with tonal modulations in the model’s hair, who is lying in an room with an Oriental ornamentation, on a low-rise mattress, while she is absorbed by her thoughts and lifts her arms up to let them rest on her head. Although she is framed from a different perspective, the setting, the prurient and dreamy pose follow those of Henri Matisse’s Odalisque in Red Culottes (1869-1954). Also, the dress, which is by Marc Jacobs, is close to those Turkish trousers which give the name to the painting.

The whole atmosphere, instead, change completely in the next shot where the color scale goes from sky blue in the background wall to the dark cerulean blue in Alexander Wang’s dress, passing by a shiny aqua green in the young actress’ eyes, penetrating as those of the lady in the painting Le Retour de la Mer (Back from the Sea) (1924) by Félix Vallotton. 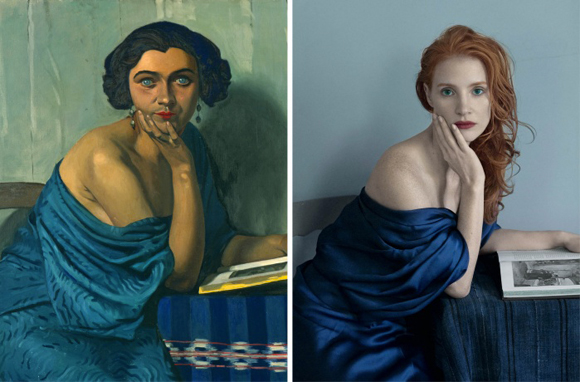 Wearing a gray dress by Oscar de la Renta, Jessica identifies with the interpretation of American President Grover Cleveland’s wife, who was portrayed by Anders Zorn in 1899. The distinguished beauty, the marble candor of the setting, the background grooves bring us back further in time: she is a statute in a Greek temple. 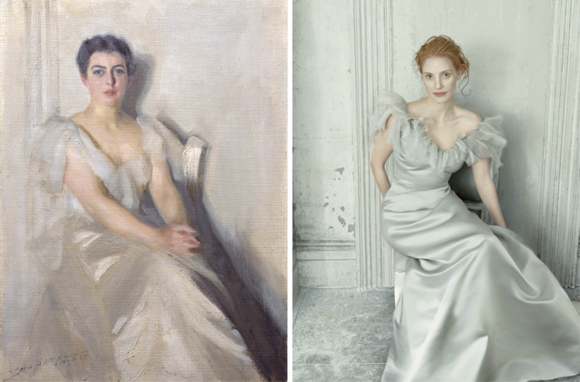 For another stunning shot, the actress plays the role of Ria Munk, who was portrayed by Gustav Klimt after her tragic death between 1917 and 1918. It is one of the most beautiful female portraits by the brilliant Austrian painter, as well as one of his last works. Leibovitz’s shot combines all the charm of the technique, Klimt’s iconography and style, which is still the favorite inspirational source for fashion designers (please look up the photographic series made up by Steven Meisel for December 2007 Vogue Italy and called “Vogue Patterns”). Vera Wang’s chiffon dress, decorated by hand, perfectly reproduces the unfinished quality of the painting (the dress and the floor are just sketched with charcoal); the background is extremely rich in floral motifs and comes alive as a real blooming garden. 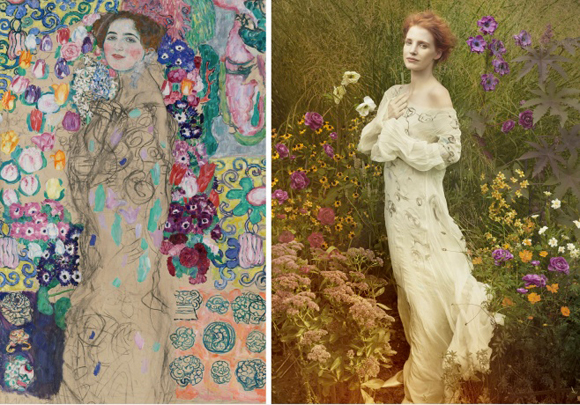 Through a skilful play of colors and lights, photography is also able to reproduce Vincent Van Gogh’s confused brush strokes. In 1888, the Dutch artist portrayed a young woman from Arles and gave her the name of Mousmé, as the Japanese girl from Pierre Loti’s tale, which particularly enthralled the painter. Compared to the painting, the photograph is horizontally placed; however, it is still traditionally arranged with the model standing over a monochrome background. Clothing is designed by Alexander McQueen and reproduces the very same decorative play of the long row of red buttons in the vertical stripes coat, which gets lost in the cloud of a big polka dots skirt. 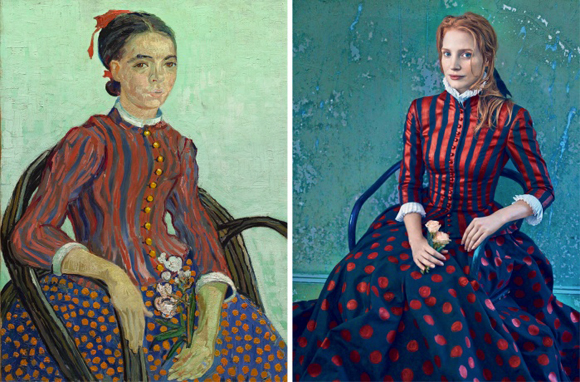 The only photograph in which the model is not wearing any dress is paradoxically the one which is inspired to Magritte’s La Robe de soirée (The evening gown) (1955). We know that Magritte’s titles are always misleading and apparently very far from the submitted subject. The shot as well remains enigmatic for its obscurity: the red hair stands out from a stretched light blue background within a turquoise sky and a quiet sea: the moon, which holds from time immemorial the reference to night in a free meaning association, stands for the unknown and mystery. 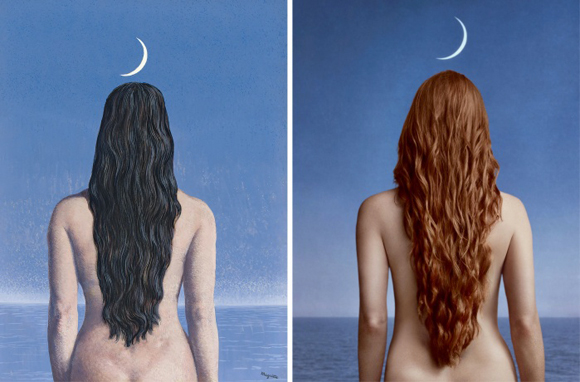 The last shot is inspired by Julia Margaret Cameron’s photos: she has been producing intense and profound portraits following the stylistic language of Pre-Raphaelites painters. Leibovitz reproduced this distinctive character: that use of focus, which is sometimes even stretched to the “out of focus”, disregards clearness and aims instead at researching plastic effects, which are possibly close to Leonardo’s sfumato.

“Nothing is lost, nothing is created, everything is transformed”; hence, this is a law of physics which we can apply also to art history, to the evolution of representational culture, to the ensemble of icons which constitute our shared visual imaginary.