Alessandro Giuliano (born in 1974) lives and works between New York, Rome and Naples.

He got his degree in Political Sciences from Federico II University of Naples. He began his career as a photographer working for theater: his aim was to investigate artistic contents through the camera. Crucial points for his career were the experiences in Rome and New York. In 2010 he took the postgraduate course of multidisciplinary specialization in photography at the ICP- International Center of Photography in NY. There, he also worked as assistant teacher. Today he is working on the project Ubiquity, which will come out in the next few weeks!

Ubiquity is a study on spatial relationships which allows Alessandro Giuliano to investigate quantum physics and Einstein’s theory of relativity. This latter claims that space is not three-dimensional and time is not a separated entity: together they form a new dimension, referred to as space-time. 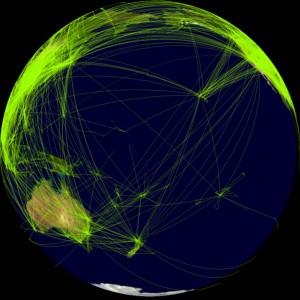 Alessandro identified maps that plot the lines of air routes from all over the world, a tangible sign of the temporary movements of people, the possible figuration of four-dimensionality. Indeed, the rapid spread of a global perception of space and time creates a new subjective dimension, where places, services, and language lose their roles as objective points of reference.

In the first part of the project Ubiquity (Winter 2011) Alessandro Giuliano involved a group of individuals belonging to his personal sphere, including friends, curators and art dealers. The intent was to collect data related to their beloved places through the system of geo-location for mobiles. The system employs spots to indicate the places in which people take their photographs, redesigning new subjective maps, based on individual factors. Photography, when conceived as a voluntary action of interaction with the surroundings, becomes a reference parameter to trace a map following our own passage in a given space-time area. 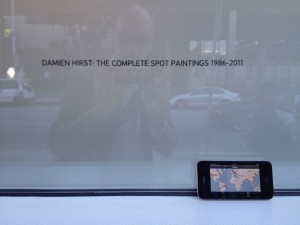 For the second part of Ubiquity (6 February – 18 March 2012), Alessandro thought about Damien Hirst and the Gagosian Gallery challenge, and how this experience resembled his own project. Different countries, different languages and different experiences with the same questions: How do people move? What makes people move? And what happens if you ask people about it?

Then the artist started the performative action by visiting the exhibition The Complete Spot Paintings 1986-2011 at the Gagosian galleries and created a series of spots, producing his personal map, conditioned in time by the actual duration of the exhibitions. Completing the circumnavigation of the globe from West to East, Alessandro used the time machine, that is the extra day that is created by crossing the meridian 180, performing a space-time action out of his presence on the physical terrestrial space. 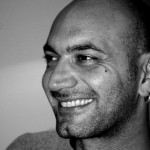 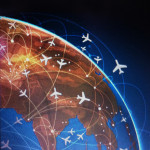 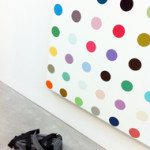 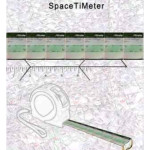