Born in Rome in 1975, after the studies at the Academy of Fine Arts, he specialized in video animation at the Loughborough College of Art (U.K.) and in painting at the Académie des Beaux Arts in Brussels.

Marco Raparelli’s style is almost instinctive, because it does not cover the use of drafts or preliminary tests, so the error becomes a natural consequence and an integral part of his work.

Everyday life is the main source of inspiration for the creation of the characters’ world designed by the artist, where funny situations and unreal scenes contrast with the reality of daily life. These characters come to life in short films of video animation such as “Everything changes” of 2010, where the artist ironically deals with the changes made by the passing of time, or as in “Abandoned Dog” of 2008, a surreal tale of a day lived by an abandoned dog. 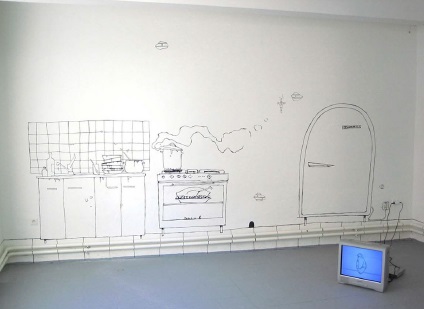 In 2006 Marco Raparelli opens himself to the wall-drawing, working directly on the walls of the “BastArt” gallery of Bratislava, within the exhibition “Growing City”; this work, entitled “Bef Kitchen”, represents a home environment in which lives Bef, first character spread from the imagination of the author: Bef is a ungraceful rude woman who represents a kind of character the artists is particularly fond of; she’s not “physically” present in the scene, but we’re able to perceive her presence, imagining her in the kitchen, or while she comes out from the door. The only single real item consists of a small television with a video-animation in loop. The technique of wall-drawing is also represented in “The Wall”, an installation made in 2010 and presented at the “Fondazione Giuliani” of Rome where the artist creates a large hole in the wall with acrylic colors and accompanies it with a heap of ruins of plaster on the floor, simulating a real break in the wall: it’s up to the viewer to determine whether it’s fiction or reality. The drawing finds his perfect location on paper and Raparelli chooses a 20 meters long one for his “My Social Awareness” of 2008, there he anthropologically represents a countless specimens of the humankind.

In 2010 Raparelli goes back working on spaces, reshaping them at the “Nomas Foundation” in Rome: he operates in a “Reading Room” creating the container which guests other authors’ works, in a large collective installation. “Non familiar idea of Rome” was born during the period spent by the artist at the American Academy in Rome: the idea was to portrait all the people who at that time funneled through the Academy, setting up the images in the spaces of the bar, which is a mandatory stop for guests and not, according to the type of the ancient “quadrerie”, in a strong connection between past and present.

The artist’s passion for video once again meets wall-drawing in “The only thing that moved next to us was the wind”, an installation made in 2011, in which the animation follows the different stages of the daily light, from the rising of the sun to the night, with a large and round moon framed by a window drawn on the wall: stargazing, we could face an imaginary space crossing the threshold of reality to observe a parallel one, similar but unreal, made up of black lines drawn by the author’s hand.

Raparelli’s characters assume human dimensions in the installation “Nudist Area”, made in 2011 for a collective exhibition titled “Made in Filanda”, realized in a former cotton mill in the countryside around Arezzo; the interaction between the characters of Raparelli’s fantasy and the reality is total; the cardboard shapes are placed into the real space, as they’re emerging from the borders of the paper, the wall or the video. 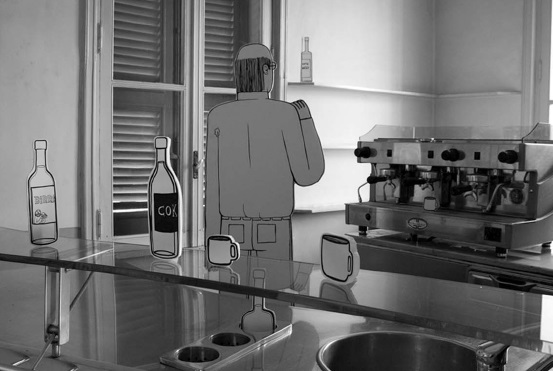 Always interested in the analysis of the “people of the art’s world”, which he studied and observed with an almost scientific attention, Marco Raparelli in collaboration with the artist Giuseppe Pietroniro, achieve this investigation creating a sort of parallel museum, made of false works of art, false information tags and even false services such as a bar and a bookshop. The irony of this operation owns a deeper reflection on the art’s situation and on the museums’ nowadays conditions; title of the installation is “Neither here, nor elsewhere”, hosted in 2012 in the spaces of the Andersen Museum in Rome.

The drawing leaves its space to the paper, conceived as a pure form in the opera “The disappeared elephant”, presented in 2012 at Palazzo Baldassini in Rome; retro-lighted shapes of paper hidden by a white cloth tell us about the historical story of the albino elephant, who lived in this palace, gift of the king of Portugal to Pope Leo X. The atmosphere generated by lights and shadows leads us into a dreamy and fairy dimension, bringing us back to our childhood. 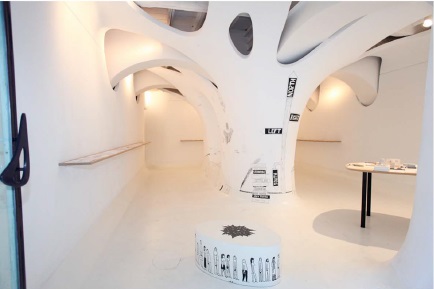 2012 is again a very important year for Marco Raparelli, engaged in important exhibitions such as the collective “RE-GENERATION”, presented in the spaces of Macro Testaccio, in which are exhibited his “unnamed” characters made by a synthetic black line; while the gallery “Ex-Elettrofonica” reserves him a solo show titled “Look Mommy, I scribbled”, which takes cue from the homonymous book published by “cura.books’, with an site-specific installation focused on the differences of mankind that each character invented by Raparelli represents. 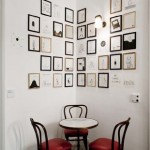 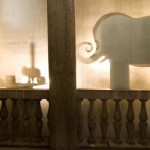 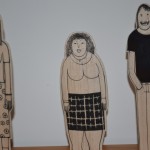 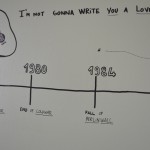 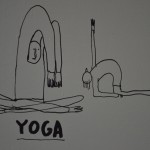