on Mar 30, 14 • by almostcurators • with Comments Off on Aakash Nihalani – Vantage @ Wunderkammern 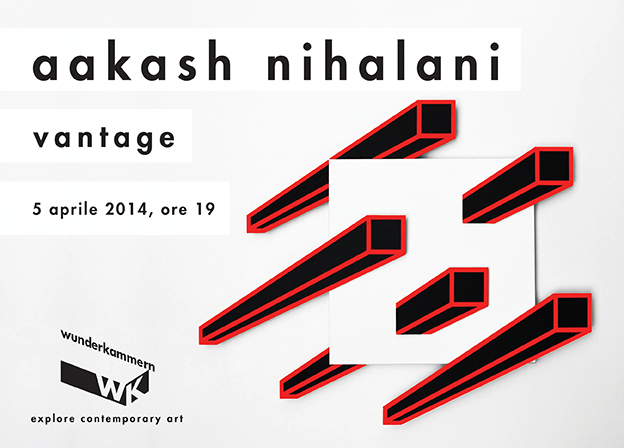 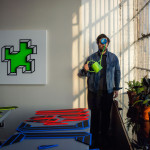 Born in Queens (USA), but of Indian heritage, Aakash Nihalani (1986) utilizes colored, oftentimes fluorescent, adhesive tape to create simple geometric shapes that simulate three-dimensionality and function as deceptive continuations of the surrounding adjacent structures. Once the optical illusions are created, it is the human body that brings them to life, achieving a visual effect that is surprising and unexpected each time. In Aakash’s installations people interact with the geometry as they would with 3-dimensional depth and perspective, as both players and as spectators alike.
In 2008 Nihalani received a BFA from the Steinhardt School of New York University (NYU), and in 2012, Lisa de Kooning awarded him a residency at Willem de Kooning’s studio in East Hampton, NY. His work has been shown on the international stage and is included in a number of publications including The New York Times, The Times of India, Vogue India, Artinfo and The Huffington Post. 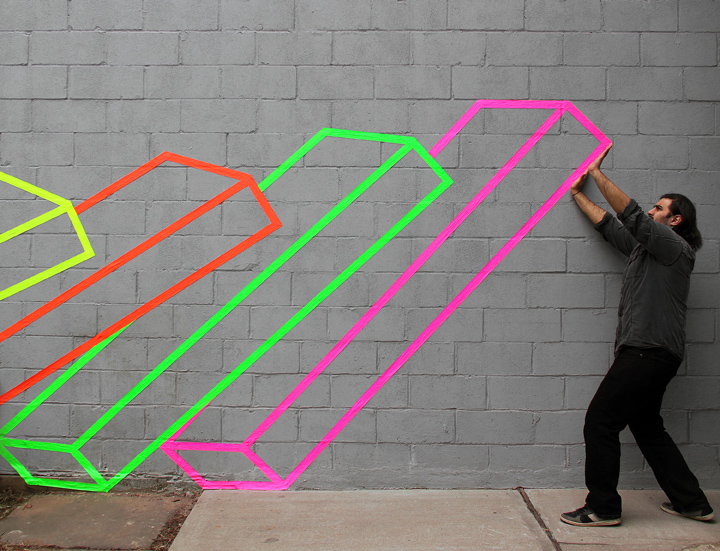 For Vantage, his first solo show in Italy, Nihalani will showcase new works, site-specific installations in the gallery, and various permanent and temporary urban installations around Rome. Pieces that play on the thin line of a specific perspective – a human and individual Vantage, as it were – where simply shifting a few feet with respect to the perceptive illusion is enough to distort the effect to the point of disappearing. 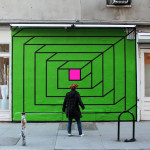 The public space becomes, then, an arena for individual investigation, for those who move “inside” or observe “from outside”: an opportunity to experience a reality far beyond common schools of vision and thought, through shapes that require interpretation and utilization by a body that reacts to them and a look that recognizes them. Vantage is precisely this: a privileged point of view on a specific vision of reality, in a constant crash-encounter between the physical and cerebral dimensions of existence. 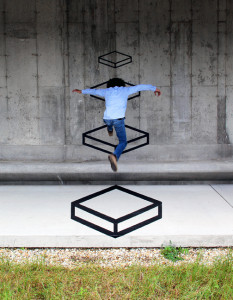 Nihalani explains: “Most artists use a canvas in order to paint on a limited surface. Like a painter I start with the canvas, but I also explore the ways to sculpt and paint around it, using it as a visual object in and of itself. These paintings, like the majority of my work, are created with a specific point of view – a frontal one – where the illusion exists and the shapes seem to come to life.” 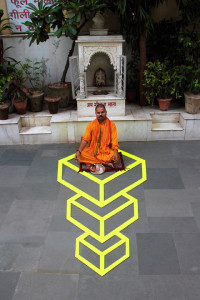 In the gallery, the artist will work with the architecture of the internal space just as he does in the urban space with relation to that which already exists. In this new series of works, Nihalani “treats the ‘architecture’ of the gallery like the architecture of the city. Just as in [his] exterior works, created in relation to things in the existing surroundings, these paintings utilize the same approach: placing blank canvases on a wall in order to create a temporary architecture with which [he] can interact. The canvases are left white, matching the color of the gallery, and become an extension of the wall. By giving the canvas a formal role in the composition, the white achieves a certain fullness and loses its “blankness”. The process is sculptural and additive, but the approach to the canvas is similar to that of painting, and fills the void between paintings, sculptures, and [his] interactive installations with adhesive tape.”

The artist will be in attendance at the opening. 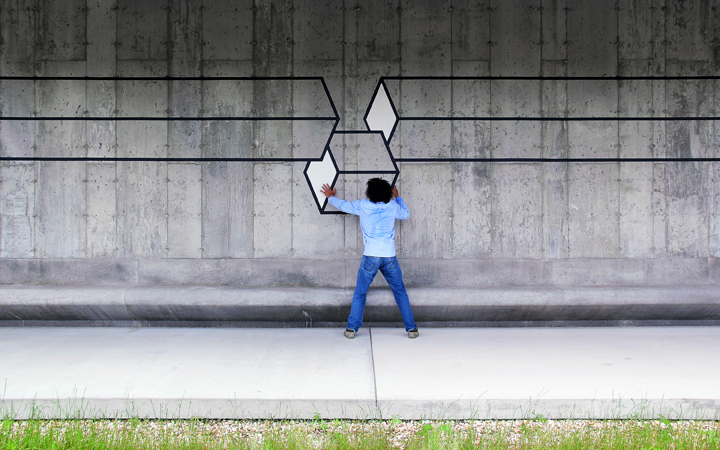 Vantage is a part of the larger project Public & Confidential, which involves five of the most important street artists on the international scene. After Dan Witz (NY), Rero (Paris) and Agostino Iacurci (Rome/Nuremberg), it is Aakash Nihalani’s turn (NY), followed by Jef Aérosol (Paris), who will close the series.