on Oct 25, 14 • by almostcurators • with Comments Off on un-existing body: Stefano Ciannella and Keaton Fox @ Rialto

Body is the first inhabited place, it is the beginning of experimentation and knowledge, it is the proof for our own existence and our own being; it is also the first known and perceived limit. Hence, it is the first space hosting the interaction and clash in the research and self-assertion of identity. In Stefano Ciannella and Keaton Fox’s works, physical presence is sublimated by non-presences, which at the same time mark its transit. Both works, by employing different perspectives, investigate inner intimate universes, as past transitions, through the absence of body. The misplacement of the tangible reference point of the physical limit of the body does not undermine the perception of existence. The essence of the past, of what the body perceived, experienced and assimilated is not left outside from this analysis; rather, it is enhanced by the continuous reference back to a bodily identity.
On display: Stefanno Ciannella’s photo series I luoghi del corpo (2002) and Keaton Fox’s video Like a Jellyfish in January (2012).

In Stefano Ciannella’s work, places, human beings, and relations are all parts of an articulated investigation process, which springs from a personal intimate research to later merge with a macroscopic analysis of social relationships and relations. According to Ciannella, it is exactly by means of the body and its movement that it is possible to combine emotions, memory and action. In the photo series I luoghi del corpo, human presence is replaced by body parts which inhabit space and interact with it, while getting bound to it as fragments from the past which has left a mark. The mannequins portrayed in the photos got their arms chopped off: the physical means allowing for the meeting with the others. Hence, the denial of the arms stands for both physical impossibility to interact with the others and refusal of lightness. 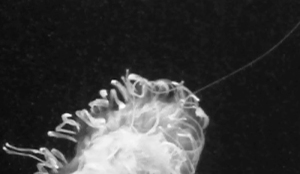 Keaton Fox employs video as the primary tool for exploring the themes of identity and perception through technology, which allows her to recognize the possible future effects of this process on civic consciousness. A non-presence, a non-place, messages on the edge of time from an answering machine, and which become meaningless and unworthy when compared with the slow movement of a jellyfish, this is what Keaton Fox is proposing in her video Like a Jellyfish in January. This animal, which is lacking cerebral mass, muscles and blood, and has been living on earth undisturbed since 650 million years ago, waves while the messages recorded by the answering machine tell us about a moment on the edge of an individual’s life because of a conscious escape from relationships.