Gaia Scaramella was born in Rome in 1979. After graduating from Rome Fine Arts Academy, she has been taking part in various collective exhibitions since 1998. She got numerous awards for her engravings and finally won the first Italian Graphics Price in Vigonza in 2007. Her research starts directly from the engraving technique, so that all of her works display a serial conception. Much of her research aims at decomposing and recomposing objects, works and memories, creating new perceptive dimensions and unexpected reading plans following articulated and multifaceted paths.

Engraving is the very origin of Gaia Scaramella’s work. Her encounter with engraving occurred during the years at the Rome Fine Arts Academy. This technique allows Gaia to express herself at best through what is the main feature of her work: the serial production, which is conceived as a creative need rather than a production modality. Incisions are indeed produced as monotypes, which Gaia has always printed in a few pieces.

In Annunciazione – Icone Familiari, Gaia merges tradition and innovation, sacred art and everyday life, combining the sacredness of the religious theme together with the family theme, in a way substituting herself to the divine. The actualization of the subject, without being trivial, allows for the discovery of the Self and the identification with the iconography portrayed, grasping the more real and concrete aspects of an earthly sacredness. 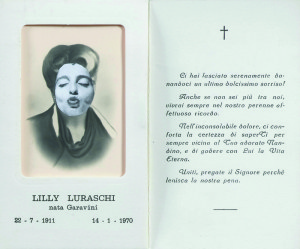 To live the life of someone else: sometimes people think about it. In “Essere, apparire e divenire”, Gaia Scaramella decided to be someone else, actually someone dead. This was not a provocation, but rather an opportunity to talk about the sacredness of the dead, between memory and folklore. The funeral tributes,  found in her grandmother’s drawer and placed one next to the other, tell us how the memory of the dead often blurs into sanctification. Each one only tells unexceptionable earthly lives. With this work, Gaia performs a real appropriation of texts, words and thoughts, which are dedicated to the dead close to her. As in the relationship between actor and character, Gaia and her everyday saints become one thing, allowing her to be virtuous and sanctified.

With the artworks produced for the show “God and I” in 2007, Gaia Scaramella distances herself from the family themes and starts focusing on a more public iconography. The geography of the ecclesiastical institution is utterly reconsidered and read through a critical but at the same time ironic approach.

On a technical level, Gaia goes beyond the physical limits of the prints: she carves her sign on doors and wardrobe shutters and paints them with varnish. These big sectional plates allow her to employ the engraving and painting techniques in a more experimental way, producing a series of installations. 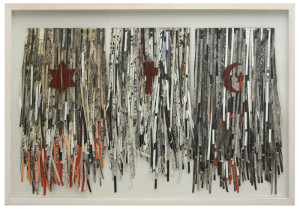 The recent process of emancipation and evolution of Gaia Scaramella’s engraving technique had explicit concrete consequences for the creation of the series Calco Trito Mix of 2008. In the creative process of the works, the desire and need to shred both the paper and the creative process itself are clear, leading to a new level of artistic production and self-awareness. After going through the printing press, the prints undergo a further mechanical step by passing through the paper-shredding machine. The images are broken and fragmented becoming unreadable and waiting to be recomposed  again according to a new vision. The only readable symbols are those of the three great monotheistic religions overlaying  the ” sign tapes.” 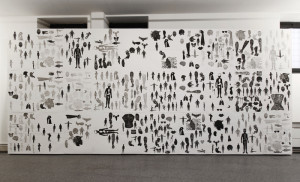 A panorama of negatives, made up of impressions from shaped molds, form the two-dimensional installation “Ex-Vuoto” (2008). The so called ex-voto – the object generally used by different religions to thank the deity for a saving grace – displays different but precise forms, including lungs, liver, brain and ovaries – mixed with images of a variegated humanity, including men, women and lovers. The ex-voto, fixed on the wall with nails that encumber movement, portrays images which are deeply significant for Gaia. This intense mix of strong emotions and light spontaneity clearly represents the two dichotomies which characterize Gaia Scaramella’s work: formal/impersonal and personal/inner. 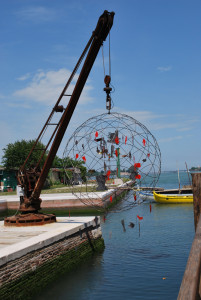 With “Capasanta” – shown during the exhibition “Sant’Elena, la seduzione nel segno”, side event of the 2009 Venice Biennale – Gaia Scaramella decided to offer the molds of the prints which formed the installation “Ex-Vuoto” to Saint Elena, as a real ex-voto. The work, conceived exclusively for the space in which it was set up, involved a geodetic ball which hung from a crane and rotated around its own axis. Inside the ball there were the zinc ex-voto which, because of the passing of time, fell into the water below, giving the votive element back to the sea and to the Saint. The process of emancipation of the engraving technique comes to an end with this last installation, where Gaia decided to symbolically and physically distance herself from her origins, offering them to another dimension. 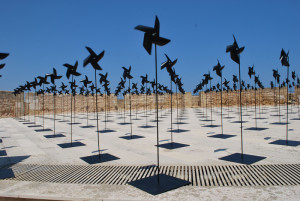 Geometrically arranged and placed at about one meter from one another, Gaia Scaramella’s 300 pinwheels remind us of a platoon, an army of brave soldiers ready to attack, or perhaps packing the defense. The installation, designed for the coverage plan for the tower of Anfonsino Castle in Brindisi, involves three hundred black monochrome pinwheels which spin constantly dialoguing with the incessant air currents around the tower, returning to the wind the sound of the wind. The pinwheels lose their primary purpose, that is the ludic lightness, and become mourning symbols imposed by war. 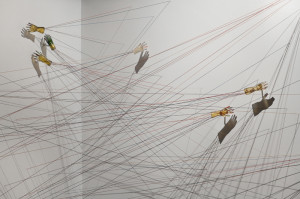 “Legami o legami”… request or complaint? Gaia Scaremella’s installation is made up of two walls closed at an angle where hands made of epoxy resin cling. This work deals with the theme of close emotional relationships that sometimes might become binding. Colored woollen yarns branch out from the hands similar to veins, arteries, capillaries and ligaments, conceptually illustrating the inner extension of the pulsating casing of the human body. The yarns go from wall to wall closing and crosslinking the corner as a hug or grip, and physically define an immobilizing state of anguish.

The holocaust is in this work portrayed as an interruption of the human and social thought, life and dignity. There is a white and sky blue old formica-coated table with metal legs and wooden structure, surrounded by four chairs. Also, ten little monochrome white man are placed on the floor. On the head of each little man there is a memory card. Inside the drawer of the table one can find an Ipad displaying the pictures stored in the memory cards. 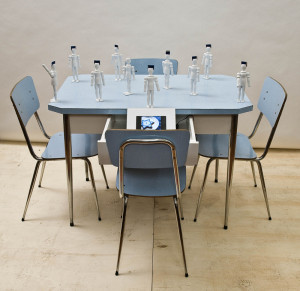 “Memorie dell’altro ieri, memorie di dopodomani” is Gaia Scaramella’s work dedicated to the tragedy of the holocaust. The memory of the past melts with a clear look towards future. Gaia focuses on the before and after of the massacre, without showing the darkest moments, creating an interactive work. While inviting the viewer to remember, the artist searches for a shared elaboration of the grief, providing a positive perspective, which excludes a mere denunciation. 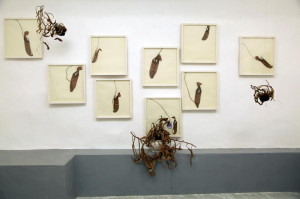 Gaia Scaramella’s articulated itinerary about the relationship between life and death leads us to “Nepenthes”. This work is made up of large pods which contain male and female profiles. The pods, ideally connected one to the other by thin branches, are actually separated through black or white frames, which symbolize in turn bereavement or heavenly candor. The human presences, connected as in a family tree, but separated by frames in closed areas that evoke either urns or shrines, stay peacefully in their pods, as if it is right the dying plant which gives them life. It is the death of one thing for the life of another.