on Sep 9, 13 • by Serena Silvestrini • with Comments Off on Book@rt – Luigi Ghirri, Lezioni di fotografia 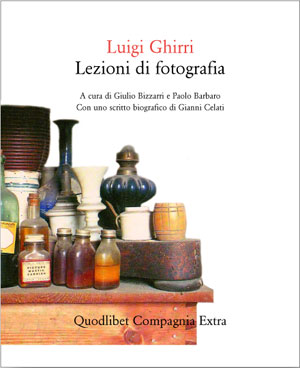 Luigi Ghirri is without a doubt the most influential Italian photographer not only for the history of Italian photography. He was born in 1943 in Scandiano and died untimely in 1992 in Reggio Emilia, leaving a great void in the world of contemporary photography. Trained as a surveyor, he will pursue this career until 1974, when he decided to open a graphics and photography studio. He approached photography during the years of conceptual art and arte povera, working in very close contact with artists, recording performances or producing works which would support performances, and very soon became popular internationally.

Besides his work as a photographer, at the beginnings of the ‘80s, Ghirri begins his collaboration with the academia, holding seminars about photography, first at the University of Parma, later in Reggio Emilia. The courses held from January 1989 to June 1990 at the University for Progetto di Reggio Emilia will be later collected in the volume “Lezioni di fotografia”, curated by Giulio Bizzarri and Paolo Barbaro. Texts were transcribed from the registrations of his work as a professor and, therefore, aims to preserve the great master’s original dialectics as much as possible. From these, it is very clear the wish of communicating his great love for and complete dedication to photography, which is told through personal anecdotes and historical insights. Similar to an autobiography, this volume presents to us specific episodes, including the production of the covers for Lucio Dalla and CCCP’s famous albums, exhibitions, experimentations, and the projects he was commissioned.

Everything is told with a simple language, something which attests also for Ghirri’s own simplicity in conceiving life, still as a young boy born in the countryside who never wanted to leave his homeland. His photos, instead, show a simplicity which is only apparent. They portray things which we all look at, but he is the only one who was able to really see. These realities are revealed to us thanks to his attentive gaze, which until today has found innumerable though vague imitations.