on Dec 17, 13 • by Emanuela Pigliacelli • with Comments Off on arte x strada – Lucamaleonte 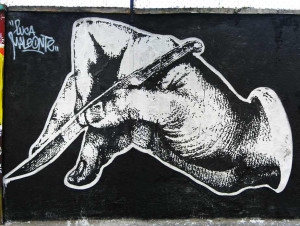 Shy and mimetic, Lucamaleonte – Roman artist born in 1983 – is able to at the same time show up and hide within the urban sphere with his interventions: insects, reptiles or birds, putti and classical statues, anatomical or architectural details are part of his creative universe which is perfectly conveyed through a masterly employment of the stencil technique.

His passion for drawing is almost innate; when he was a child, indeed, he practiced with his pencil while always keeping alive his interest for art history. However, his artistic education essentially followed autonomous drives as an autodidact, although his study of restoration, which is very close to art, actually contributed to the development of his meticulous and trial practice. 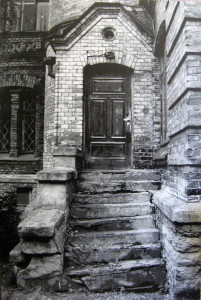 His first contacts with Street Art – which he however finds to be an inadequate label to describe his practice – date back to approximately 2001 in a very spontaneous way: “I just happened to work down the street in a particularly exciting, natural and easy moment”.
After posters and stickers, he decided to experiment with stencil, which is nowadays his distinguishing character to such extent that he would rather use the words Stencil Art instead of Street Art to describe his work, since he believes the technique to be the characterizing element of his artistic language. The only thing changing is support, which can be either an external wall as well as a canvas in a gallery. “I think Street Art is everything that has an artistic dignity and which is done in the street and follows certain definite reading and interpretational rules; the illegal aspect is one of the possibilities of expression in this movement, some people make it a philosophy of life, some others ignore it, I feel to be in between. I don’t feel so presumptuous to bring the street into the gallery, outdoor and indoor works have much to share, but at the same time to depart.” 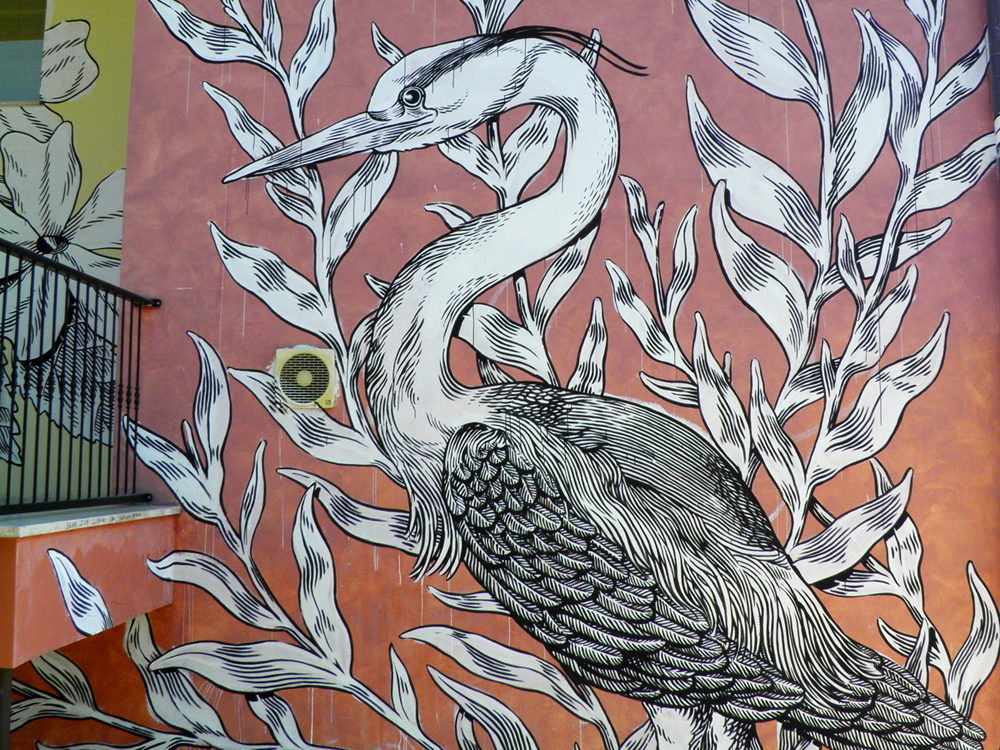 Hence, he doesn’t personally believe this to be a contradiction because he thinks the street and the gallery are two very distinct entities, which inevitably involve two completely different kinds of approach. As the chameleon can change color every time, the artist is versatile to adapt his contents and language to the different situations he encounters: first of all, in the outside dimensions and enjoyment possibilities vary, than the image is more plain and immediate and can be perceived also from a distance and quickly when in a hurry: 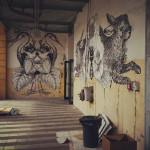 “I believe that when you work down the street, you have a great responsibility toward the public and the chosen spot, so it is up to the artist’s sensitivity to decide how to act toward those who live the city every day. I always try to be very critical and imagine the reactions of those who might potentially see my work every day going out; I always do my best to integrate my work with the surface and history of the area, I try to go beyond a mere wall decoration. When works are respectful, most probably they will be respected.” 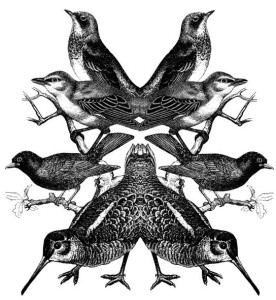 The works for the gallery, instead, come to life from the intimacy of his studio: these works are more pondered and finished exactly because they are made for a different more specific public which decides to go in and look at the artworks certainly with greater attention.
Regarding his style, at the beginning it was much close to not only pop art for both colors and choice of characters, but also to hyper-realistic painting and photography for the attention to detail, which is constant in his works. Indeed, through continual exercise, investigating every aesthetic possibility, he was able to get very singular results with the stencil technique: by cutting out very elaborate half-masks, which are put one on top of the other in different colored layers, the stamped drawing turns out to be incredibly rich in detail, even in those very tiny particulars which sometimes make the works almost photographic. 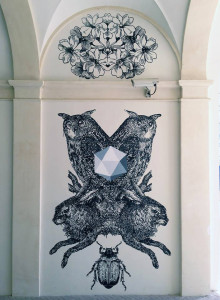 Despite duotone, indeed, the artist is able to also convey tonal transitions through a masterly use of chiaroscuro. Besides precision and attention to detail, which are almost obsessive, Lucamaleonte’s work distinguishes itself from other works realized with the same technique by the choice of the subjects. Usually, he favors portraits; however, his expressive research has been recently focusing on ancient imaginary reworked through contemporary schemes and with drawing playing a fundamental role: “I am trying to convey contemporaneity through the language and symbols which belong to the Italian historical and artistic tradition; with my works I usually tell about my vision of the world through symbols and codified images […] taken from anatomy, botany and social sciences books and proposing them mixed together and decontextualized.” 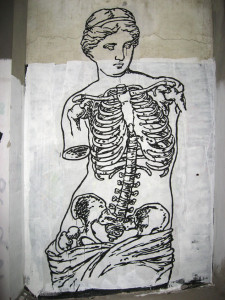 Inevitably, by drawing subjects from these sources, the artist ended up with learning also its specific style, which is no more serigraphic or comic, but rather close to the pure world of illustration; the obsessive approach to repetition is something which roots in archive documentation, a sort of cataloguing of icons belonging to the shared imaginary, a personal collection of artworks which aims at being a collective archive: “The role of the Internet is nowadays fundamental, since it allows the artists to reach a wider audience, offering their works to collective memory and making them eternal, something which urban art cannot be by definition.” 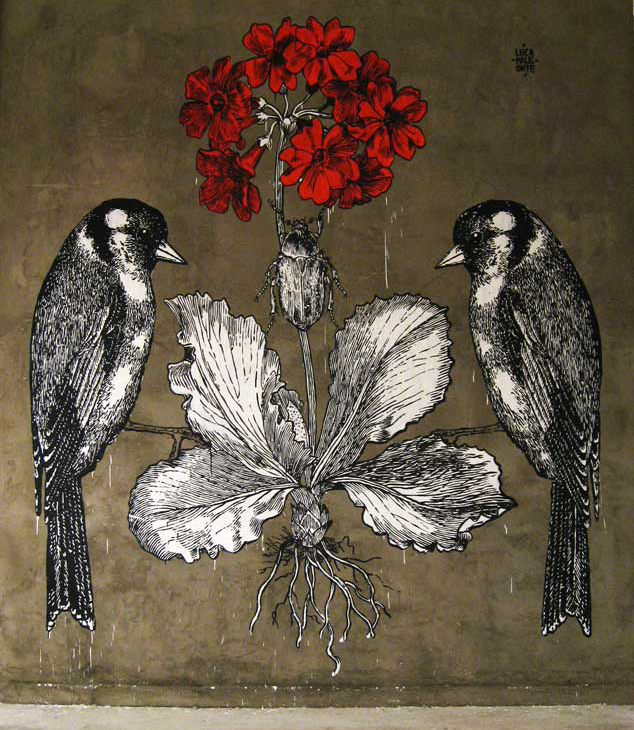 Back from This is Rome – the big Roman collective for Urban Art and audiovisual experimentations – the artist’s agenda includes work on several walls in Rome, which will come to life by the end of next spring, and two personal exhibitions.