on Mar 12, 13 • by almostcurators • with Comments Off on Mea Culpa @ Wunderkammern 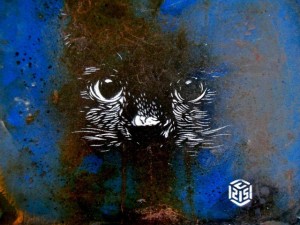 Wunderkammern presents C215, otherwise known as French street artist Christian Guémy. C215 has become one of the most influential figures on the international street-art scene, with urban installations decorating the walls of cities around the world, and unmistakable technique and aesthetic. In 2012, Paris’ Musée de La Poste exhibited his work alongside that of Banksy, Invader, and Shepard Fairey for the exhibition “Au-delà du street art”, or “Beyond Street Art”.

Born in Bondy in 1973, Christian Guémy earned a degree in Architecture History and Theory after having first studied Economics, and then went on to receive a PhD in Art History. He began his artistic career in 2005, developing an extremely personal style characterized by the use of stencils. Over time, he transitioned from creating strictly in black and white to a two-toned scheme, and finally settled on the current chromatic explosion that distinguishes his style today.

His work, distinct as it is historic, sociological as it is artistic, represents the creation of strongly contextual art, intertwined with the urban and cultural fabric of each place in which it is created. Through portraiture and the masterful intersection of lines, the artist manages to capture his subjects’ deepest expressions; each feature becomes a sign of the life these people have lived, generating emotions and emphatically communicating with whoever views them. Guémy depicts everyday people in their most authentic capacities, delving into the humility and depth of the social fabric. It is in these elements that we can observe his strong passion for Caravaggio and the influence of Romanticism.

In Christian Guémy’s works, therefore, we find the fusion of different artistic elements that orbit around the reading of emotions and the celebration of sensitivity. For his exhibition “Mea Culpa” in Rome, Guémy provocatively analyzes the concept of admitting fault, insisting upon contemporary man’s necessity to reflect on the past and to assume responsibility for his actions according to history. Furthermore, he pays homage to one of the artists from the past dearest to him – Caravaggio – highlighting the expressive potency that characterizes his scenes.

Sabina de Gregori’s new book “C215” (Castelvecchi), with the participation of Jef Aerosol, Obey, Logan Hicks, Martha Cooper, Sten & Lex, and Wooster Collective, will be presented for the occasion. The artist will be present and will sign limited copies of the book.

For the opening Guémy will also paint walls around Rome, some in collaboration with NUfactory. The event is promoted by the Institut Français – Centre Saint-Louis in Rome as well.