Pietro Ruffo was born in 1978 in Rome, where he now lives and works.
After studying architecture at Roma Tre University, in 2010-2011 he gained a research fellowship at Columbia University in New York.

Ruffo’s art is essentially linked to the basic elements of his architectural training: design, paper and drawing. All his works actually are the result of a meticulous planning close to details, and take shape on the sheet through a delicate but incisive sign. However, they don’t retain the two-dimensionality of a table because paper, carved, gains the third dimension. The result is a stratified work, with multiple visual and semantic readings that investigate the great themes of universal history, in particular individual freedom and dignity constantly threatened by massification underway in contemporary society. 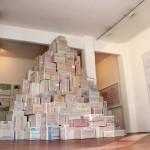 With the installation Das Chinesische Reich (2007), the artist put the attention on what that he defines “ Chinese empire”: an impressive pyramid composed by boxes of goods from China represents the power of commercial dynamics that crush workers under the weight of exploitation. Inside the pyramid, infact, was made a niche wherein a video shows the condition of displaced persons and refugees attempting to cross the frontier to escape. Complete the title a quote from the book “Gomorra” by Roberto Saviano: “Goods have all the rights of movement that no human being may ever have”. 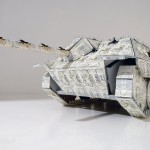 In artworks like Youth of the Hills (2008) he expresses, instead, the contradiction that you breathe in the territories of the Middle East conflict: a swarm of beetles covers a Second World War German panzer reproduced on scale. Insects have been carved on pages of Jewish prayers without destroying the integrity of the texts, sacred in the Jewish culture, and emerge from the work as if they were released from the sand, their natural habitat. The beetle is a symbol of strong religious affiliation of the people, because of the dramatic territorial dispute. 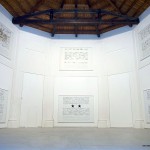 The same theme is tackled in the exhibition Un istante complesso (2009), curated by Ludovico Pratesi, at the Centro Arti Visive Pescheria of Pesaro. Protagonists are six large flags of the states in perennial conflicts: Israel, Lebanon, Iran, Iraq, Syria and Hamas. The flag, Pop symbol par excellence, was deprived of color that leaves its place to a graphic texture, dense overlapping of animal skulls: aggression, violence and death, but also stratification of people in their territory.

In his last works acquires great importance the theme of freedom, becomed almost a constant in his research. 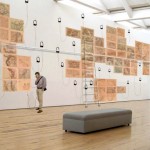 During his residence in New York in 2010, Pietro Ruffo had the opportunity to meet young philosophers and artists from all over the world, and ask them questions about the notion of liberty. In this way was born Atlas of the various freedoms (2010-2011), a real geographic atlas wherein territories and faces overlap to form an audio-visual mapping of this universal concept, inspired by the thought of Isaiah Berlin.The installation is so composed by graphite portraits of this people and their interviews that can be listened through headphones that hang from above. 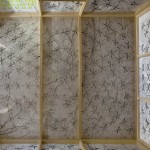 In other artworks the ideal of liberty is embodied by the dragonfly, insect carved and repeated on the intere installations’ surface. Is the case with Negative Liberty (2011) and Liberty House (2011), site specific installations that, as in a baroque trompe l’oeil, transform close locations in forests, finely drawed by pencil or painted in ink wherein the observer is immersed, almost like in a secret garden.
In Revolution Globe (2011) the dragonflies are carved, instead, on a large world map in paper, evoking the individual’s liberty to move without boundaries or restrictions: a direct reference to the revolutionaries episodes of the Arab Spring, caused by the absence of individual freedoms and human rights violations.
In World Spring (2012) the artist inserts on a geographical world map, single Arabic words (democracy, tyranny, peace, blood, etc.) extracted from the slogans used by protesters during the Arab Spring. Every word, painted in gold leaf, cut and placed in relief, is framed in a geometric pattern inspired by Islamic tiles. The result is an abstract network that covers the globe and symbolically connects distant and different regions and countries. A visual and conceptual metaphor of the web, the communication tool through which new generations of Egyptians, Tunisians, Libyans, Yemenis, Syrians, have been in contact to organize and disseminate the revolutionary events. 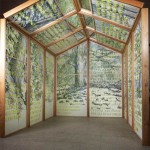 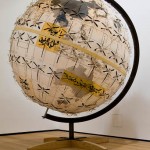 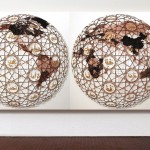