on Dec 2, 13 • by Serena Silvestrini • with Comments Off on Lui chi è?? Valentina Vannicola

Valentina Vannicola was born in Rome in 1982.  After  graduating with a thesis on film theory from La Sapienza University of Rome, she got her diploma from the Roman School of Photography.

Her artistic practice refers back to the genre of staged photography, a contemporary photography trend which is aimed at presenting constructed scenes as real according to the dynamics of cinematography.

A fundamental character in her works since 2008 is literature, which inspires the artist to create shots with imaginary and suggestive settings, though still in a very traditional fashion. 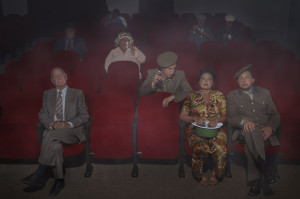 Every shot portrays the mise-en-scene of a key fragment which is taken from famous literary works and  interpreted in a very personal way. These works speak about her life: the favorite setting is Tolfa, a small city in the province of Rome where Valentina grew up, the characters participating in the reenactment of the story are her friends, relatives and other inhabitants of the town (the newsagent, the postman, the school janitor), while the composition of the mise-en-scene is strongly influenced by Asian cinematography and scenic design, which Valentina studied in-depth during her academic career.

The result is a photographic production which is coherent, touching, and able to catch the viewers’ attention to guide them through a completely personal reconstruction of the recreated event. 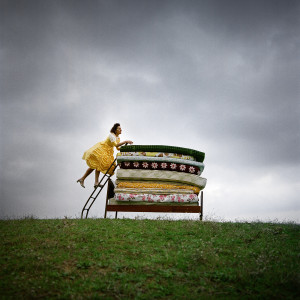 Photography is then for the artist a creative necessity: by using this tool, she is able to give life to literary  images. And she does so with the very same knowledge of those who are  fully aware of how to make a movie: this happens in one of her first series “The Princess and the Pea” (2009). With the employment of seven images, Valentina Vannicola brings us back to the main sequences of Andersen’s  fable. The story is set in the Maremma Laziale and characters interpreting the different roles are her friends and relatives. The artist took care of the entire project, starting from the reading of the fable and following with the draft of a “storyboard” made up of preliminary sketches which hold the idea of the final shot composition. 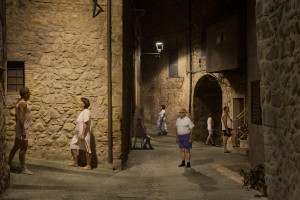 The collective participation of those who volunteer to be shot is extremely important: as a real work team, everyone strives to find “scenic” materials and to choose the most apt location, offering their viewpoints on the project, which turn out to be fundamental for the artist herself.

Hence, every photographic shot comes from an intimate and personal  study and creation stage, followed by the practical collective stage of the mise-en-scene. The photographic narrative summarizes with seven sequences the story of a princess who was able to prove her “regality” by realizing the presence of a pod hidden in her bed under a pile of twenty mattresses. Coming from the same period, the series Escape (2009) is inspired by Cervantes’ “Don Quixote de la Mancha”. The operational rules of personal study and active group participation are the same. 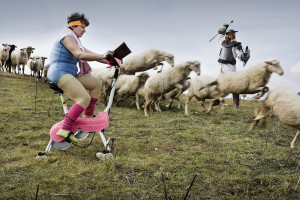 In this case, the ironic element of the images is stronger than before, thanks also  to the protagonist of the shots, who is a bored housewife captured while reading the picaresque novel while having a hot bath or riding her exercise bike, plunged into the protagonists’ bizarre adventures.  The reference to Monicelli’s irreverent atmospheres in “L’Armata Brancaleone” is immediate: the woman imagines a scruffy hero confronting a flock of sheep, a fantasy which is in a way attached to her everyday life in a small town in the countryside.

In “Alice nel paese delle meraviglie”(Alice in Wonderland) (2009), the protagonist is a mature woman, closer to the “mom” model we all hold inside, and different from the character imagined by Carroll. The characters’ grotesque quality is very strong and always ironic, so that the White Rabbit and the Mad Hatter as well are embodied by adult inhabitants of Tolfa, who play along with Valentina Vannicola, allowing her to tell us something about her life, introducing to us characters and places she grew up with. The atmosphere, which is at times comical, sometimes clouds, making the setting more grotesque. 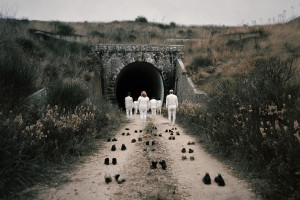 The series ”Inferno”(Hell) stands for Valentina Vannicola as a great challenge: in 2011 she decided that Dante’s masterpiece, a cornerstone of Italian culture, would work as a source of inspiration for her shots. Her study was long and strongly in-depth; the artist’s operational scheme is the same as for her previous series: analytical study of the text, draft of a storyboard during which her imagination takes shape, search for the right setting, characters and materials. 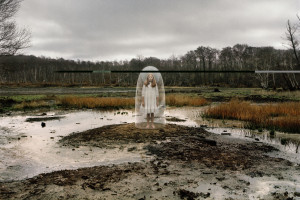 Once more, Tolfa and its inhabitants are the protagonists of the shots: the chosen areas are those of the Maremma laziale, Santa Severa coast and the striking caldara in Manziana. There will be fifteen shots which the artist has been thinking about for a while, there are images and thoughts that little by little are taking shape from her mind in the form of sketches which almost spontaneously gather among her personal papers and which only after one year would finally come to light in such a complex project.

The beholder’s viewpoint takes Dante’s place, the narrator who guides us in the discovery of the afterlife waiting for sinners: we then find again the door to hell with damned souls resigned to their fate, the limbo, the indolent, glutton, avaricious, wrathful, apathetic souls, other than famous characters such as Farinata degli Uberti, condemned in the circle of heretics, and Paolo and Francesca in that of lust. Every image is always accompanied by Dante’s tercet from the poem which inspires the shot. 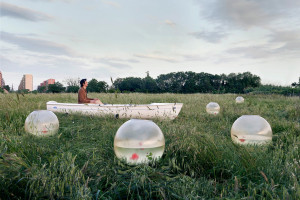 “Living Layers III” is the first project realized by Valentina Vannicola which does not refer back to literature. It was born in collaboration with Marco museum and the Roman gallery Wunderkammern and it does not portray the artist’s native town as its setting; rather,  it focuses on the working-class neighborhood Torpignattara. Although the starting point and the setting constitute a novelty to confront with, the artist’s planning scheme stays almost the same.

The first step is then an in-depth study of the area and neighborhood, both from a urban-planimetric and human point of view, made up of walks to discover people inhabiting Torpignattara every day.  The discovery step generates in Valentina Vannicola’s mind paradoxical images according to which a tree might grow from the tiles of a terrace, a whale  might plunge into the depths of earth, opening asphalt as if it was a dense and dark sea, a boat might navigate a sea of grass  and so on. 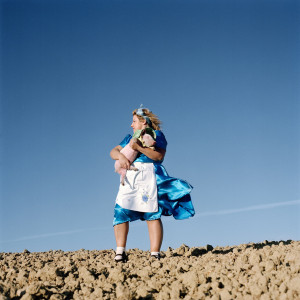 This dreamlike element  is associated to a strong emotional element, which is expressed by the characters portrayed: everyone is profoundly lonely. Isolation, apathy, resignation are all part of the anxiety coming from city life, especially in a big city such as Rome which presents scenarios of marginalization in the outskirts.

In her most recent project (2012), Valentina Vannicola goes back and imagines a completely personal version of great novels, this time confronting herself with a work coming from Italian contemporary literature by Stefano Benni (1976) and titled “Bar Sport”. The cornerstones of the narrative are the characters embodying the Italian stereotype of the habitué at the provincial bar, including card players, the beautiful cashier, old wives, the playboy and the “attractions” of the bar, such as the pinball machine, the billiard table, the telephone and the raffle. This series is made up of the episodes told by the clients at Bar Sport, stories which always  oscillate between fantasy and reality and which are once more played by the “actors” from Tolfa. Valentina Vannicola is represented by OnOff Picture agency and Wunderkammern gallery in Rome.